History of the Course

In the early 20th century, the members of both the Pitlochry Golf Club and the Pitlochry Ladies Golf Club played over a nine-hole course situated on the banks of the River Tummel. The holes weaved their way down from Faskally Woods to the pavilion at the Recreation Ground and back again... 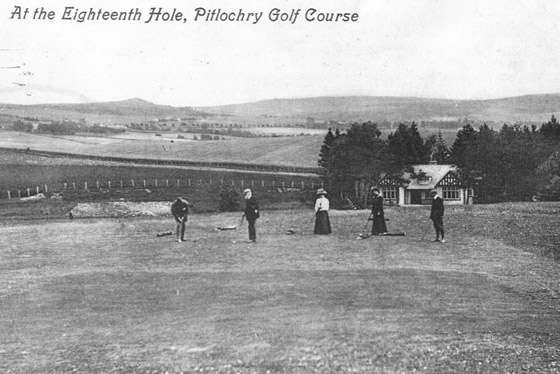 Colonel Charles Butter of Cluniemore was a major landownerin the area and he didn’t think that this golf course was sufficient enough for a Highland dwelling such as Pitlochry. A new location for a new course was needed and three different sites were looked into. In the early 1900’s there was an organisation called the Pitlochry Improvements Committee, devoted to bettering the town and surrounding area for the benefit of all. A “too good to miss” opportunity arose whereby farmland could be changed to golfing terrain upon the Colonel’s estate and between Colonel Butter, the Improvements Committee and the members of both Pitlochry Golf Clubs, they all worked together to piece together a better course for golfers to play on.

The timing of this change over from farmland to golf course came in the golfing boom in Scotland between 1880 and 1909. It saw the start of the development of an infrastructure for tourism, which has proved to be an important, long-standing, venture.

The golf course was constructed during 1908 with Willie Fernie of Troon being commissioned as the initial designer. He saw the natural beauty of the Balnacraig and Drumchorry farms upon which the course now rests and set about using the undulating landscape to its full potential.

The course layout was quite different to that of today, which saw two par 5 holes included on the scorecard. Interestingly, the 18th was a good three shot hole, which now incorporates both the 17th and 18th holes as they now stand. The course has been altered through time and the layout of today is testimony to both Willie Fernie the original architect, and Major Cecil Hutchison who in the early 1920s, tinkered and tweaked with it to produce the golf course as we know it at the present time.

The course has never been the longest by any stretch of the imagination and was not intended to be. The course length of 5695 yards was protected over the years by small, fast, sloping greens and everyone has found Pitlochry to be a tricky place to come and play. There have been questions raised about how players of the stature of Harry Vardon, Max Faulkner, Bob Charles, Walter Hagen and Tommy Armour, amongst others to walk the fairways of Pitlochry, found these notorious greens, but the consensus is that at least their scorecards would have survived the test.

Further minor changes have been made with different Head Green keepers making slight upgrades to a well-established layout. Keepers of the Greens have comprised of men such as Mr Louis McDiarmid, Mr Jim MacDonald, Mr George MacDonald, Mr George Robertson, Mr Bill Sutherland, Mr John Whitton,Mr Donnie MacDonald, and most recently Mr Chris Hodgson.The overall management of the course for the last three years has been under the experienced eye of Stuart Griffiths. Stuart who served his time at Tain and Carnoustie also oversees the neighbouring Blair Atholl golf course.To a man they have continued the tradition of preserving Pitlochry as a popular venue for all comers. The length of the course stands now at just under 5700 yards with a par of 69 for men and just over 5100 yards with a par of 72 for ladies.